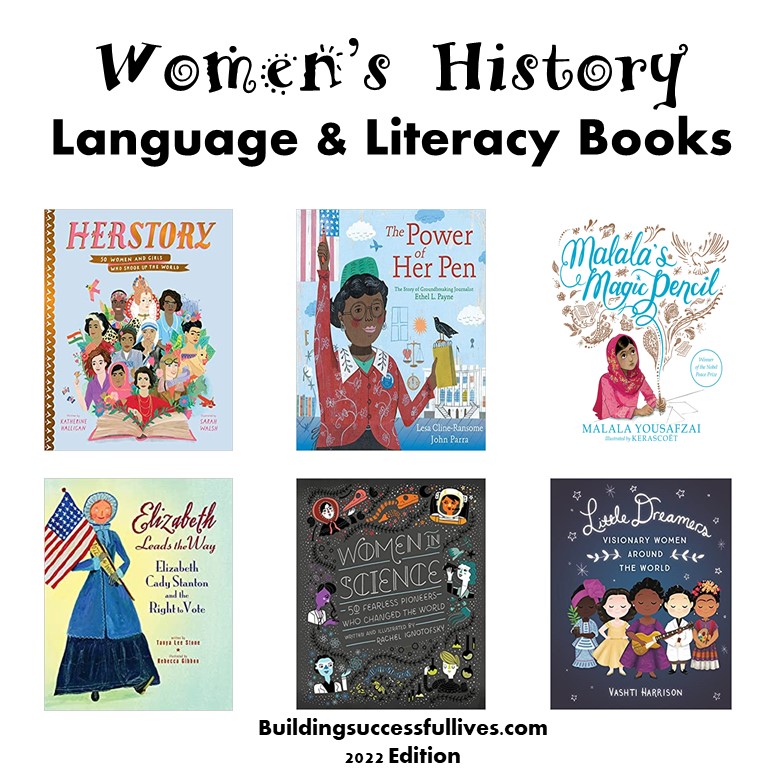 Women’s History Month originally began in California as Women’s History Week. The first week was celebrated in 1978 and purposefully coincided with March 8th or  International Women’s Day that is sponsored by the United Nations. Each year, The National Women’s History Alliance selects a theme for the month. Since we are still in an ongoing pandemic, the organizers selected “Women Providing Healing, Promoting Hope” as the 2022 theme to honor frontline workers, women who work in the service professions, and women from diverse cultures who provide both healing and hope in their communities. You can learn more about that organization here.

This month is celebrated each March since the U.S. Congress passed Women’s History Month as a Public Law in 1987. Numerous women throughout the decades have committed their lives to service in various areas. Often times their contributions are overlooked and not celebrated as they should. You can learn more about the month on history.com.

Children and adolescents need to increase their understanding of non-fiction text. Consistent use of informational text is essential to remediating language impairment. They must be provided guided practice opportunities to increase linguistic skills using engaging and higher level content. Therefore, Women’s History Month is an ideal theme to use meaningfully during speech/language therapy sessions. I recommend the following six books to use with students with communication disorders, language disorders and learning disabilities.

This book is a new addition to my speech/language library this year. Children and adolescents will have an opportunity to learn interesting facts about a wide variety of women. The illustrations depicted in the text are bold and vivid. You can select women that relate to the 2022 theme of providing healing and read aloud information about  Florence Nightingale, the founder of modern nursing, to children with language disorders. She was born in Florence, Italy and then her family moved back to England. From a young age, she had a desire to become a nurse and provide vital assistance to others.  She worked in a London hospital, cared for soldiers during war time, and even started the Florence Nightingale Training School for nurses in 1860. She was the inspiration behind the creation of the International Red Cross, a humanitarian organization that exists in over 192 countries today. Mary Seacole is another historic woman that made a significant contribution to society. She was born in Kingston, Jamaica and was a nurse, writer, and war hero. She learned many of her nursing skills from her mother who was a traditional healer and cared for injured soldiers in a boarding house. She traveled  to various countries in the Caribbean, Central America, and England. She was instrumental in ending the cholera epidemic in Jamaica and a yellow fever outbreak. During the Crimean War, she went to England and treated soldiers where she earned the name “Mother Seacole.” These are two of many women that were positive contributors to our global society that are highlighted in this excellent book.

The Power of Her Pen, The Story of Groundbreaking Journalist Ethel L. Payne by Lesa Cline-Ransome

This book is about Black journalist Ethel Payne who documented events as they unfolded during the civil rights era and beyond. She was a national television and radio commentator. Ethel was the first Black woman to join the White House Press. She traveled overseas and reported in various international affairs during war time and diplomacy negotiations. She was known for asking challenging questions that many did not want to pose and was given the title “First Lady of the Black Press.” This book is appropriate  to read aloud to children in 4th-grade through middle school level. It is written at a fifth grade reading level with a lexile of 1010. Lexiles are a measure of text complexity. You can learn more about that here.

This is a timely book about young activist, Malala Yousazai, who desires for children to find their voice and use it to create a better world. She is a strong advocate for education for girls and helping those in need. Malala lived in Pakistan where girls were not allowed to seek higher education. She spoke out against oppressive practices. She currently resides in Birmingham, England.  Malala later was awarded a Nobel Peace Prize for her dedication as a female education and humanitarian advocate. What if we had the magic to find solutions to life’s most pressing global issues? What if we can truly make a difference? This book is deliberately written from her perspective. Did you know that there are over 130 million girls who do not attend school? Malala Yousazai’s organization, Malala Fund, has the mission of enabling girls to learn and lead.

Elizabeth Leads the Way, Elizabeth Cady Stanton and the Right to Vote by Tanya Lee Stone

This biography is about the life of Elizabeth Cady Stanton. It has a 3rd grade lexile level (700 L), but can be read aloud in speech/language therapy to children in 2nd-5th grade. As a young girl, she often heard that boys were able to do more things than girls. She lived during a time when girls and women did not have equal rights. Her father was a judge and she learned that women could not even own property and even if their husbands died, they would lose the property and land where they lived. Elizabeth wanted to change these unfair laws and she desired for women to have the right to vote. I like the author’s note that is provided at the back of the book that provides additional facts about Elizabeth’s life. Did you know that she ran for congress in 1866? She was the creator of the National Woman Suffrage Association with Susan B. Anthony. She served as the president of the organization for 21 years. In 1920, 18 years after she died, women finally were legally provided the right to vote with the Nineteenth Amendment to the U.S. Constitution.

Women in Science, 50 Fearless Pioneers Who Changed the World by Rachel Ignotofsky

This is another wonderful recommendation that has valuable non-fiction passages. Speech language pathologists can read aloud the passages to children and adolescents with communication disorders, language disorders, and learning disabilities. I think this book is ideal for children in 4th-8th grade. They will learn about phenomenal women in the scientific community who made contributions in research, medicine, science, technology, and engineering.  Some of the women included in this book include Rosalind Franklin, a scientist who discovered DNA, Katherine Johnson, a mathematician who calculated the trajectory of the Apollo 11 space shuttle to the moon, and Ada Lovelace, a computer engineer.  The majority of the information in this book will be new knowledge for most students.

Little Dreamers Visionary Women Around the World by Vashti Harrison

This is an excellent book by Caribbean American author, Vashti Harrison. I added this book to my speech/language therapy library last year. The author purposefully selected amazing women from around the world from different cultures and wrote brief biographies with accompanying illustrations. Children and adolescents can learn about Marie Curie, Physicist and Chemist, who was awarded the Nobel Prize in Chemistry and for contributions in medicine. Did you know that she invented a portable X-ray machine that was used during World War I? They can learn about Katherine Dunham, choreographer and anthropologist. She studied how the roots of African culture spread around the world and the contributions of dance from the African diaspora. She founded the Dunham School of Dance and Theatre in the U.S. She combined African and Caribbean movements with modern and ballet dance forms. Katherine is known as the Matriarch of Black Dance and the Dunham Technique is still taught today. There are over 50 women featured in this book so that you can easily differentiate instruction based on the content presented and students’ interest. I often provide children choices of influential women to learn about during speech/language sessions.

Have you used these books in speech/language therapy? What are your favorites?